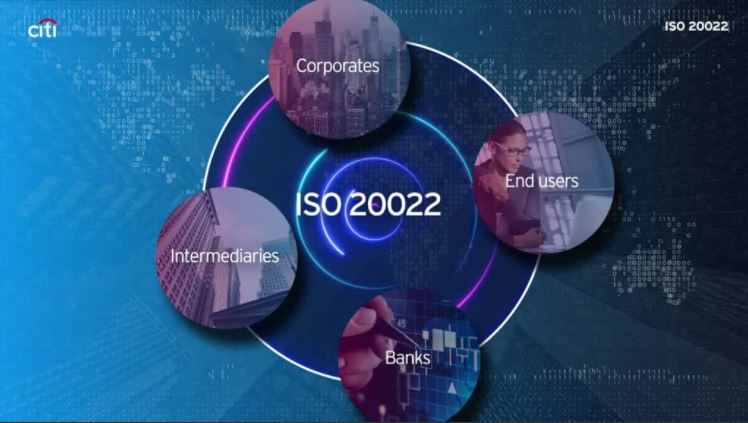 The International Organization for Standardization, or ISO, is a global committee in charge of maintaining uniform quality standards for products, services, and systems. ISO’s standards have been adopted by many companies in various industries across the globe—including, of course, the banking industry. If you’ve worked with your bank’s compliance team, you may have already heard of ISO standards like ISO 9001:2015 (quality management) and ISO 270001 (IT security management). You may know a little less, however, about ISO 20022, which is a standard for payments messaging that was introduced in 2004.

But in recent years, ISO 20022 migration has become a more mainstream topic among banks. This is because international payments are easier than ever for consumers to make, and sophisticated technologies for international payments are more commonplace. More banks are subscribing to the data-rich ISO 20022 payments standard to improve the overall quality of their customers’ international payment experiences. As such, it won’t be long before you get the opportunity to upgrade your bank’s payment message technologies for compliance to ISO 20022. The question is, will it be worth it for your bank to spend the time, money, and effort to adopt the ISO 20022 standard? What return on investment can ISO 20022 promise to you?

You’ll find answers in this brief guide to ISO 20022. Here’s why your bank should get ready to facilitate ISO 20022-compliant payments and comply with this data-rich standard for payments messaging.

ISO 20022: Everything Banks Need to Know

At its core, ISO 20022 is a standard for financial institutions to follow when they exchange electronic messages, like through the SWIFT messaging network. This pertains to the messages that come with credit card, credit transfer, or foreign exchange transactions from one country to another. ISO 20022 recommends adhering to a set logic for communication while transferring payments, which is definitely helpful in cross-border banking environments. When adopted by various banks, the ISO 20022 standard can make international payment experiences even safer and smoother for global customers.

One thing ISO 20022 seeks to achieve is greater consistency in payments communication. To that end, the standard calls for the following:

Another key quality of ISO 20022 is its emphasis on rich data, or the complex data that helps banks and customers arrive at higher levels of payment clarity. With rich message data at their disposal, banks can improve their efficiency at processes like reconciliation of account balances after international transfers. Data-rich messages also allow banks to keep customers informed about the circumstances behind their transactions. On the compliance side, greater facility with rich data also helps banks uphold their anti-money laundering (AML) protocols for cross-border payments.

It’s important to note that adoption of ISO 20022 is not mandatory for financial institutions. Banks always have the choice to use their own proprietary payment messaging standards. Nevertheless, from a competitive viewpoint, it makes perfect sense for banks to transition out of their old systems and adopt that of ISO 20022. This holds especially true for banking businesses that want to expand their operations and increase their revenues from international payments.

The Best Reasons for Your Bank to Adopt ISO 20022

Now that you know a little more about the standard, it’s time to start thinking about how ISO 20022 adoption can benefit your institution. Below are the top three reasons to consider it.

You Need to Keep Up with Your Banking Industry Peers

In the next ten years, more and more high-volume international transactions will soon be governed by ISO 20022. Banks that want to bolster their current international payment systems or venture into trade finance will want higher interoperability among partner banking systems. Adopting ISO 20022 will allow you to collaborate with your international peers and share a rich and secure messaging standard for your transactions.

You’ll Be Safer from Financial Crime

The standard set by ISO 20022 can also help you and your staff detect forms of financial crime, such as trade-based money laundering. For example, having a certain standard for payment messaging structures can help you identify SWIFT messages that seem “off.” You can flag suspicious transactions based on their accompanying message data, and thus keep your bank’s reputation from being soiled by involvement in financial crime.

You’ll Gain the Respect of Your Customers and Your Regulators

Lastly, by following ISO 20022, you can eventually become the bank of choice for high-volume international transactions because you’ve got the messaging end down. A greater number of your retail and corporate consumers will trust you to oversee high-value transactions across borders. You will also earn the trust of your regulators if ISO 20022 helps you improve your digital compliance, in areas like screening for sanctions, for example .

There are several resources that your bank can turn to if you’re considering an ISO 20022 migration. For one, there’s a dictionary dedicated to ISO 20022, which contains all the business concepts, data types, and message concepts that you’ll need to know. And if you’re purchasing a new digital payments solution for your bank, you can ask your vendor which software features on it will aid in your compliance with ISO 20022.

It’s up to you to scale up your bank’s current payment technologies to accommodate the demands of this data-rich payments messaging framework. But for sure, moving fast and making ISO 20022 native to your digital payments system will pay off. Increase your revenues from international payments and become a frontrunner in cross-border digital banking by adopting this standard for your bank soon.